In Doom 3, the player may occasionally come across friendly marines. Marines are usually equipped with a Machine Gun, combat helmet and body armor, but are less skilled (and less lucky) than the player. Marines are never seen in active combat during gameplay other than in multiplayer. However, during a cutscene the marines of Bravo Team are seen being ambushed and killed by a group of Imps and Wraiths. They are also seen on camera views and heard over the radio trying to defend their positions and fight off the demons.

During the invasion, many of the marines are turned into Zombie Commandos by Dr. Betruger and used as his personal guard. 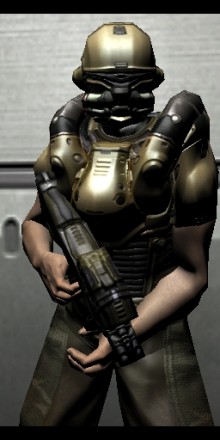 A marine in full gear.

The Marines are responsible for security and defense on the UAC facilities on Mars. The exact nature of the relationship between the Marines and the UAC is not fully explained. Though they are often referred to as "UAC marines" they are also purported to have come from the United Nations Space Marine Corps, which is reinforced by the Doom 3 novels (while not directly stated in-game, but their names are all generally American). Because the UAC provides major weapons and defense research for the military, the government established an active duty Marine base on Mars to assist the UAC with extra security while the UAC continues to conduct research for new military weapons. For all intent and purposes, the marines - at least on Mars - work for the UAC, as they are the ones supplying the military with weapons and technology.

In the game, Marine HQ is the hub of activity for the Marines and their subsection Mars Sec (short for Security), and is also one of the main air and space traffic control centers for Mars City. Marines and Security personnel are stationed and/or patrolling throughout the base, in and around areas including EnPro, the Delta Labs, the Monorail, the Alpha Labs and most visibly in Mars City where the Marine HQ and the primary Armory is located. In the character's PDA, a video disk about the Marine's role on Mars states that all Marines are under the command of Master Sergeant Thomas Kelly. While the Mars-Sec seem to share many duties with the Marines, it appears that the Mars-Sec serve as the day-to-day regular UAC Security Guard force. Marines, on the other hand, tend to have more specialized jobs, such as being tasked with guarding special areas around the base (Marine Command for instance), as well as accompanying science teams being sent through the Portal.

The Marine Corps also apparently possesses a number of spaceships of its own, which the player is commanded by Kelly to call to Mars for backup from the UAC Base's primary communications center. Whether or not the player sends the transmission himself, it is still sent- and when the Earth fleet finally arrives to back up Mars, they find the planet wrecked, and only one Marine left alive who had almost singlehandedly stopped the entire demonic invasion.

At the start of the demonic invasion, the Marines and Mars Sec are taken completely by surprise by the Hell forces. Many are transformed into zombies or are killed. Some marines survive but are cut off from each other. Only Bravo Team manages to stay intact initially, but they too are eventually ambushed and wiped out at the EnPro Facility. At the end of the game, a team of Marines, Recon Zulu, enters the ruined facility and rescues the lone Marine.

Marines are also present with Elizabeth McNeil's expedition to Mars, with one unit in particular, Red Team, being assigned to investigate Site 1. Most of the Marines are wiped out when the Artifact is activated and the demons invade again.

Allied Marine Squadmates: A popular AI ally mod for Doom 3. Adds characters such as Campbell and Sergeant Kelly, as well as more minor characters such as Bravo Team, Fire Teams 2 an 4, and Recon Zulu as functional AI units .Those and others are also included as "follower" that the player can lead, rather than standing in place and talking, like usual.