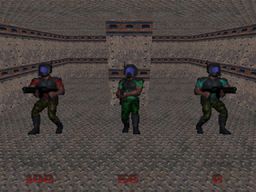 The three marine bots (from left to right: red, green, and aqua) in a custom map.

Marine bots are a special monster type in Doom 64 which only appears in MAP33: Title. Internally they exist in three different varieties, with red, aqua, and green palettes respectively. Of the three, only the red and aqua bots are actually used in the released versions of the game.

The marines behave similar to players in that they use the same sprites and sounds and attack with various hitscan attacks. The red and green bots use a series of six pistol shots exactly equivalent to those fired by the zombieman, while the aqua bot instead fires a burst of three bullets with properties identical to those of the player's pistol.

The marines are not friendly monsters. Their AI is the same as other monsters once they have acquired a target, which they accomplish by scanning the thinker list for the closest mobj to their location that is not also a marine bot - this could potentially include the player, who is made invulnerable on MAP33 partially for this reason. If that map is hacked to be playable, or the bots are placed in custom-made maps within the ROM file or for the Doom64 EX source port, which emulates their behavior precisely, they will eagerly fight the player. They are actually quite dangerous, being nearly on par with the chaingunner in terms of threat level.

Marine bots only occur on MAP33. There are a fixed number which always appear at the same locations on the map, and their behavior will be strictly deterministic in the Nintendo 64 version of the game. In the Doom64 EX source port, certain game settings such as respawn can affect them, however.