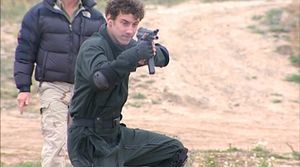 Al Weaver portrayed The Kid in the film. Here he trains in a Behind the Scenes Featurette with an MP5K.

Mark Dantalian, also known as The Kid, is the youngest member of the RRTS. The mission to Olduvai on Mars became both his first and last mission for the RRTS. The Kid pairs up with either Sarge or Reaper for the duration of the events, but eventually ends up with Sarge back at the Ark Station in Area 51. Scouting the terrorized facility which has now become home to imps and zombies thanks to the viral Hell knight monster (Curtis Stahl), he discovers a group of survivors, mostly women and children. He relays this back to Sarge, who becomes angry with The Kid for disobeying an order to clear the sector of anything living. Sarge kills The Kid for insubordination, and Reaper and Pinky briefly hold their weapons on Sarge, but are interrupted by the Hell knight.

The Kid's primary weapons were a pair of SMGs built from MP5Ks.

In the novel based on the film, it is revealed that The Kid was recruited by the RRTS after a brief skirmish at a ship yard. The Kid was working as a dock guard, and while the other guards scattered as the fighting broke out, The Kid remained to fight with the other RRTS members. He was specifically noticed by Reaper. The Kid, along with the rest of the squad (minus Sarge), was also in a vision Reaper had while traveling through the Ark for the second time. Whereas everyone else was dead in some way (Mac was talking to Reaper, but having been decapitated earlier, he was holding his head), Reaper noticed that The Kid still seemed to be alive.