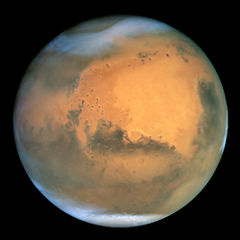 Mars is the fourth planet from the sun in the Solar System. A barren, wind-swept, rocky desert world with a tenuous carbon dioxide atmosphere and very little water, it figures as a significant setting in many versions of the Doom canon, where humankind has begun the process of its colonization.

Doom's action takes place on Phobos and Deimos, the two moons of Mars, although in the introductory story the protagonist is initially stationed on Mars itself, where the UAC has set up nuclear waste disposal facilities. The military, of which the player character is a part, has loaned the Martian moon bases from the UAC to perform research on teleportation technology.

It is often assumed the setting of the game is on Mars, but in fact none of the events take place on the planet. In fact, the player never ventures to the surface of the planet in any of the games or episodes. Doom 64 has sometimes been thought to take place on the planet's surface, as the game itself was ultimately vague about its setting and referred only to it being under a policy of "planetary quarantine," maintained due to apocalyptic levels of radiation. Information on an official Nintendo webpage for the game places it back on Phobos, however, a detail also consistent with some pre-release reviews of the game whose canonicity was otherwise unverified.[1]

In Doom 3, Resurrection of Evil, and The Lost Mission, the action is set directly on Mars, in the fictional Mars City. The player is required to venture onto the barren surface of Mars a number of times during Doom 3, and must fight off demons while topping off his oxygen supply via collectible tanks. Although the planet is portrayed as being realistically inhospitable, a decision was made early on to increase Mars' gravity to match Earth's for gameplay reasons.

In the continuity of Doom 3, Mars once hosted a population of highly advanced humanoids who created a complex civilization and controlled a technology described simply as "mystic" by UAC scientists. Remains of this ancient civilization were discovered by the UAC during construction of the first underground Mars base at Site 3. A teleportation device constructed by the civilization was discovered in 2115 at Site 1 and led the UAC to attempt to reverse engineer the device, in spite of encoded warnings against this left by the ancient civilization. This device was what destroyed the civilization, as it turned out that the technology inadvertently opened a portal to Hell. After building the Soul Cube through the sacrifice of most of their population and using it to seal the portal, the few survivors left the planet and are implied to have went to Earth, where they became ancestors of modern man.

In Doom (2016), the UAC has constructed a sprawling facility known as the UAC Mars Base in the Hellas Planitia impact basin on the surface of the red planet. The base was built not far in relative terms from the Argent Fracture, a location in Promethei Terra where powerful Argent plasma was first discovered leaking from a deep fissure in the year 2095. The base serves via its central, prominent Argent Energy Tower, designed and constructed by Dr. Samuel Hayden, as the power source for the entirety of Earth. It is also the center of the UAC's top secret weapons design, interdimensional travel, biological engineering, and occult research divisions. All activities on the base are classified, and all methodologies and technologies devised by the UAC there are carefully protected trade secrets.

The base's sentient artificial intelligence VEGA is housed in a separate facility in a polar region of the planet on or underneath its ice cap in order to assist with the facility's enormous heat dissipation requirements.

The existence of ruins on the surface of Mars can be observed in the area between Site 03 and Resource Operations, and the presence of Argent energy on Mars in the first place seems to indicate that the game's continuity includes some past events there which have not been illuminated. These could be connected to the ancient civilization shown in Doom 3, as other artifacts, including the Soul Cube and a depiction of its use, seem to tie the two together.

Mars has gained a substantial atmosphere with thick clouds, which seems to indicate that some degree of terraforming has been undertaken.

In Doom Eternal, the Doom Slayer returns to Mars in the later part of the Mars Core level. After using the BFG-10000 weapon situated on Phobos to blast a hole in the planet's surface, the Slayer takes a drop pod down to Mars' core and enters the lost Night Sentinel city of Hebeth, where a functioning slipgate can take him to Sentinel Prime.

In the 2005 Doom movie, Mars is featured as the initial setting of the film. A distress signal is received from the UAC's Olduvai Research Facility on the surface of Mars, and the Rapid Response Tactical Squad is called into action to investigate. It is discovered that scientists at the facility were performing classified research on a retrovirus (implied to have been genetically engineered by ancient Martians), combining it with the human genome to find that it could either give a person superhuman strength and agility, or transform them into a horrible monster, depending on that person's personality and moral qualities.

The Olduvai facility is linked with Earth via a teleportation device known as the Ark, which enables instantaneous transport between there and the Ark facility on Earth at Area 51. Because of this, however, containment of the retrovirus to Mars proves impractical - creatures escape through the portal and begin infecting the base back on Earth. John Grimm (Reaper) and the rest of his surviving squad must return to Earth to defend it.

Olduvai is named for the Olduvai Gorge, a location in Africa where many early hominid fossils have been discovered. This is likely a nod both to Doom 3's backstory in which the ancient Martians were ancestors of modern man, and an allusion to the film 2001: A Space Odyssey, which places its opening scene in that location.