"Another Newbie. Welcome to the worst assignment you'll ever have."
― Marak [source]

Mars City is the name of the first level of Doom 3. It's part of the settlement Mars City, one of the main locations of the game. The level serves as a narrative introduction and a short tutorial on the basic features of the game along the way. The player receives his PDA and picks up the first assignment from Sergeant Kelly ("Sarge"). It is the only level in the game to not include any enemies or weapons. Not to be confused with a later level also based in Mars City after the invasion, Mars City: Union Aerospace Corporate Division. 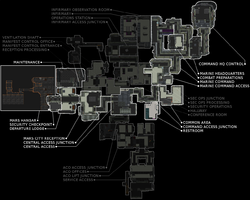 The game begins with a short video introducing the Union Aerospace Corporation (UAC), an interplanetary company that operates above and beyond all legal and moral obligations in the development of the most advanced technology known to man.

Following the UAC presentation, the game cuts to a display showing the approach of a transport coming in for a landing on Mars. The shuttle contains Counselor Elliot Swann and his bodyguard, Jack Campbell, who have come to Mars to check up on Dr. Malcolm Betruger. According to Swann, Betruger has overstepped his authority in some way, so he and Campbell are there to bring him back into line. The player character, the marine, is also on the transport. His first duty is to report to Marine Command and receive his orders. As soon as the opening cutscene ends, security guard R. Cooper tells him that all new arrivals must check in at Mars City Reception.

The marine follows the walkway to the Security Checkpoint's doorway. He passes M. Caseon, who sits on a bench. This disturbing fellow says he needs to get out of here, and he encourages the marine to do the same. He advises the marine not to trust anyone. The marine proceed through the door to the Security Checkpoint, where a technician tells him to stand on one of the red squares on the floor so that he can begin the marine's bio-scan. After the technician successfully performs the scan, the marine goes through the door to the reception.

The marine will be brought to the reception desk in a cutscene, and is given his PDA. The receptionist will also direct him to Sergeant Kelly and say he needs to head directly to the Marine HQ by simply following the signs. The marine proceeds through the passage on the right, and sees Swann and Betruger arguing about the working conditions on Mars. He continues down the corridors and proceeds to Marine HQ.

The only items the player can get on the level are the two bullet clips from the storage cabinet #001. However, other items can be seen, but not obtained, in the armory, the security checkpoint, and in some offices.

The security checkpoint has four shotguns and two small shell boxes. One of the two offices near the reception contains the ACO keycard, which the player will have to acquire when revisiting the area after the invasion, and the other office contains a large med kit. Another large med kit can be seen in the infirmary.