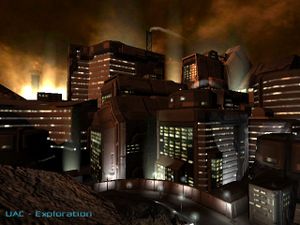 Mars City is a UAC base located on Mars, constructed 25 years before the events of Doom 3. Highly trained marines as well as a private security unit called Mars City Security (Mars-Sec for short) are stationed there to protect it. Mars City houses the Marine Headquarters, under the command of Master Sergeant Thomas Kelly. Mars City has plenty of office space, labs, in-base communications, break rooms, a medical area, and its own armory. Mars City has its own underground maintenance areas. The base is protected by operational sentry bots. There is an elevator that leads to the monorail station. For fun, Mars City has an arcade machine, Super Turbo Turkey Puncher 3.

Mars City (Intro)
The Mars City main area contains a subterranean shuttle bay, a reception area, the central access junction to other parts of the base, Marine Headquarters, a break room, a medical area, and an armory.
Mars City Underground
Mars City Underground is what keeps Mars City operational. It has significant storage space, power, and its own communications arrays. Most of the workers are frightened and stressed by recent occurrences that began along with the teleportation experiments in the Delta Complex. There is a security checkpoint in control of T. Brooks. Mars City Underground also has an airlock that leads to the surface.
Administration
Administration houses the UAC board directive on Mars and is the main reporting site for all workers.
Alpha Labs
The Alpha Labs were a research lab built in the year 2130. Its main focus was to create technologies such as the Elemental Phase Deconstructor and the Hydrocon. Divided in 4 sectors, these Labs managed to create some of the most astonishing technologies ever seen.
EnPro Plant
The EnPro Plant is a fusion reactor dedicated to supplying energy to Mars City and to create the plasma cells necessary for the plasma rifle. A huge core powers the entire plant.
Communications Transfer
Communications Transfer is a series of tunnels and storage facilities between the communications center and the EnPro plant. Oxygen tanks are held there after many pressure failures had occurred.
Communications
The Communications Tower is the primary off-base communications processing and relay center for the entire base. Its satellites are automatically connected with UAC-Earth and work together with the Phobos Routing Station Uplink.
Recycling Plant
The recycling plant is perhaps one of the most important facilities on Mars. Its main focus is to recycle the waste products of the Mars base. It is divided into two sectors. The marine is introduced to Dr. Betruger in the second sector.
Monorail
The monorail is a station that houses the monorail train. It is used to transfer personnel from the recycling plant to Site 2 or to the Delta Labs. The main entrance of the Delta Labs is protected by an automated turret, which can be deactivated with proper clearance in the security room.
Delta Labs
The Delta Labs are the most advanced research complex on Mars. It houses four sectors and the third generation teleporter (Project Apollo), which is the cause of the invasion at the beginning of the game.
CPU Complex
The CPU Complex manages data processing operations on Mars.
Erebus Facility
Erebus Facility is a largely subterranean UAC Mars base and one of the earliest facilities constructed on Mars. It's linked to the archaeological excavations exploring the ruins of the Ancient Martian civilization.
Phobos Labs
The Phobos Labs are a small but sophisticated research facility in Mars City.

The core area of Mars City itself also occurs as the final level of Doom Resurrection.