Mars City: Union Aerospace Corporate Division is the third level of Doom 3. It is the same area as Mars City, but takes place after the demonic invasion. The marine is given his mission to link up with Bravo Team in this level. This is where the demo ends. 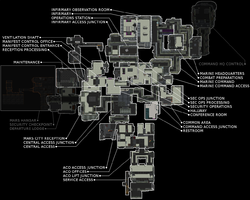 The marine returns to Mars City to find the place in chaos. The sounds of battle can be heard coming from the walls, but at this point most of Mars City has already fallen.

Fairly early in the level the marine encounters a survivor Roland who is hiding in the ventilation shaft near the elevator. Roland extends a ladder allowing the player to climb into the shaft. He then urges the marine to go get help.

The marine uses the ventilation shaft to enter the Manifest Control Office and from there fights his way through Security Operations to the Infirmary. From there he gains access to Marine Command and arrives back at Marine HQ. All the marines stationed there are dead, but a communications console is still working and has an incoming transmission from Sergeant Kelly who is pleasantly surprised to see that the marine is still alive.

Sergeant Kelly informs the marine that he is trapped in the Delta Complex and has decided to set up a command post there. He orders the marine to link up with Bravo Team and help them send a distress call to the Earth Fleet. In order to reach Bravo Team, the marine must head through Alpha Labs. Kelly also updates the marine's security clearance, giving him access to the ACO section of Mars City.

With the aid of a surviving sentry bot, the marine fights his way through the ACO area to the elevator. From there, he rides the elevator to the next level: Administration.

Marine Comm Center
Return to the Command Message Center for a status update from Sergeant Kelly
ACO Keycard
Obtain an ACO Key card for access
Alpha Labs Administration
Join up with Bravo Team in Alpha Labs. Go through Administration for entry into the Alpha Labs Sector.