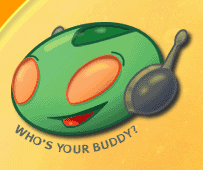 Martian Buddy is a fictional internet company featured in Doom 3. Calling itself "The Greatest Company Ever Conceived", it is a "direct marketing advertisement" company which sends out copious amounts of spam for products such as pharmaceuticals, MMORPG games, pornography, radar technology, stimulant drugs, cooking utensils and penile enhancement. It is unclear if the company merely advertises these products or actually sells them. Martian Buddy spam emails can be found on multiple PDAs throughout the game.

In the expansion Resurrection of Evil, the level Phobos Labs - Sector 2: Molecular Research contains the arcade game Martian Buddy Blaster, a point-and-shoot minigame where the player has to shoot asteroids (with a weapon that looks like the classic BFG) to protect themselves and collect the Martianbuddies. Successfully completing the game gives the player a link to a subpage on the martianbuddy.com website, where the player could find the code to a Martian Buddy cabinet[2] found in the level Phobos Labs - Revisited: Teleportation. The subpage also contained a hint about a BFG 9000 hidden in the same level. This game was replaced with a copy of Super Turbo Turkey Puncher 3 in Doom 3: BFG Edition and has thus far remained missing from subsequent versions of the game.