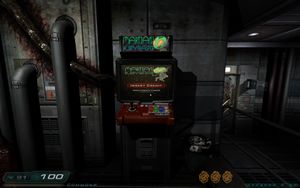 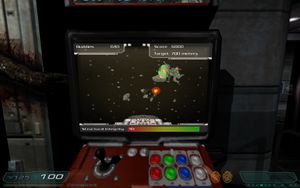 Martian Buddy Blaster is a minigame which occurs in the 2005 original version of Doom 3: Resurrection of Evil. Like Super Turbo Turkey Puncher 3 before it, it is one of several Nabcon arcade games that occur throughout the Mars City complex. It is a first-person rail shooter game with five levels where the goal of each level is to rescue a certain number of Martian Buddies, mascots of the like-named company who resemble little green aliens. If the fifth level is cleared, a congratulatory e-mail is received on the player's PDA informing them that they should visit the (now defunct) website at martianbuddy.com to receive special prizes. On the real-world website, the player could find the code to a Martian Buddy cabinet[1] found in the level Phobos Labs - Revisited: Teleportation. The subpage also contained a hint about a BFG 9000 hidden in the same level, implying that it was a special gift left for the player by Martian Buddy, though the weapon can be found there regardless.

In each level, a collection of objects floats toward the player, who has control of a blaster gun which appears identical to the classic BFG9000, though it only fires single directed shots at a time. Objects which approach include asteroids, which must be destroyed to avoid taking damage; power-ups which must be shot once—but once only—in order to collect them; and Martian Buddies, which can be rescued once they touch the screen but which the player must avoid shooting. If asteroids or bombs (a form of "power-up") touch the screen, the player's ship's structural integrity rating will be reduced by 10. If the integrity reaches zero, a game over occurs, but the player can continue the game an unlimited number of times.

There is only one copy of Martian Buddy Blaster, which can be found in the kitchen area of Phobos Labs - Sector 2: Molecular Research.

Martian Buddy Blaster, along with all other unique Resurrection of Evil minigames, was removed from Doom 3: BFG Edition, and has not been present in any other version of Doom 3 released since (all of which have been based on it).

Bonuses are assigned at the end of the level for accuracy and for saving Martian Buddies. The points table is as follows:

By shooting a power-up capsule one time, a power-up will be released which the player will obtain when it touches the screen. If a power-up is shot again after being released from its capsule, it will be destroyed instead. There is one negative power-up, the bomb, which should either be left unopened or should be completely destroyed to avoid damage.