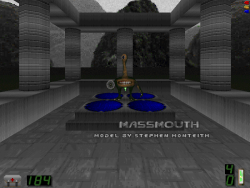 A screenshot of MassMouth from the MassMouth 2 end credits

MassMouth 2 is an acclaimed Doom modification that is a lot more plot driven than the original MassMouth PWAD. MassMouth must embark on a journey to save his boss, The Worm, who is kidnapped by a mysterious group of aliens. Some maps provide the player with differing paths. Also features multiple endings that can be achieved depending on the player's actions.

John Romero: MassMouth's enemy. He abducts The Worm and harasses MassMouth along the way.

Ontras: Black aliens which resemble giant squids. They are man-sized, and walk upright on their tentacles. They work for John Romero. Ontras carry advanced weapons, such as Ontra Shotguns. They also use rayguns, similar to those in The Adventures of MassMouth.

One Trooper is a friendly Shock Trooper who helps MassMouth in his quest.