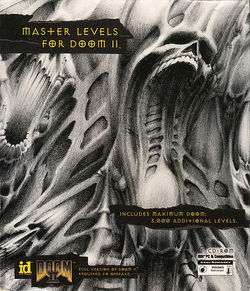 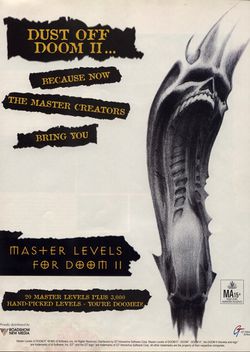 Australian magazine advert for the Master Levels for Doom II.

Master Levels for Doom II CD, from the Depths of Doom Trilogy collection.

The CD contains twenty WAD files created by various authors under contract. The file TEETH.WAD contains a secret level, so there are a total of 21 levels. To ease playing these WADs, the collection also includes DOOM-IT, an application created by Chris Badger for id Software which allows the individual WADs to be loaded through a menu interface.

The CD also included a digital catalog called id STUFF, which offered encrypted software for which an unlock code could be ordered, as well as mail order products such as T-shirts.

The Master Levels Menu Interface is a 2010 ZDoom WAD created by Zippy which is designed to replicate the menu functionality of DOOM-IT in-game and allow all 21 levels to be played without restarting the engine each time. Once the WADs are added, the Menu Interface can be loaded in ZDoom, and used to play each WAD at any skill level in whichever order the user wants; they will be returned to the menu each time they complete a level. 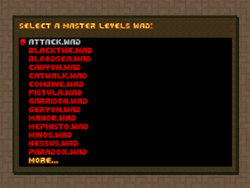 The Master Levels selection menu in the Unity port of Doom II.

Recent versions of the Eternity Engine include native support for playing the Master Levels from within Doom II without use of command-line parameters or the need to exit the game to play other maps or the normal game. After configuring the directory in which the maps are stored (it will be automatically detected if installed via Steam or in the standard DOS install location), the menu pictured to the right can be used to start any of the maps. The secret level of TEETH.WAD is accessible by using the secret exit switch in the first map of that WAD file. After a level is completed, the menu reappears. A new map can be started, or escape can be pressed to return to the Doom II title screen.

A Master Levels map selection screen also appears in the Doom Classic Unity port of Doom II as of the January 9 update. Upon starting a new game and selecting the episode "The Master Levels," a list of levels will appear, functioning similarly to the menu used in the Eternity Engine. The selection uses the full names of the levels instead of their WAD file names. Completing a level will reopen the menu, presenting the option to choose a new level or exit to the title screen. The secret level of TEETH.WAD is accessible through The Express Elevator to Hell by finding the secret exit in the level.

If Crispy Doom is able to detect MASTERLEVELS.WAD, it can be loaded as a PWAD for Doom II, with fixes to ensure that Tag 666 still works properly in the fourteenth and fifteenth levels. As of version 5.9.0, it can also automatically assemble the individual PC wads to work as if they were MASTERLEVELS.WAD, if they are placed in the same folder as Crispy Doom. It also uses revised versions of the ending texts from Classic RBDOOM 3 BFG, depending on if the player takes the normal exit from MAP20, or the secret exit to MAP21 and finishes that level.

Classic RBDOOM 3 BFG can assemble the individual Master Levels WADs into a copy of MASTERLEVELS.WAD. Like Crispy Doom, the port ensures that the necessary maps behave as they're supposed to despite using a different level number, and also includes a second file titled mlbls.wad. The contents of this wad include a custom INTERPIC based on that of Doom II, but colored white to match the boxart of Master Levels, level names to appear on the intermission screen, and John Anderson's starry sky textures.

While there is no real level progression in the original PC release, the console releases have organized them in episodes, generally based simply on alphabetical order.