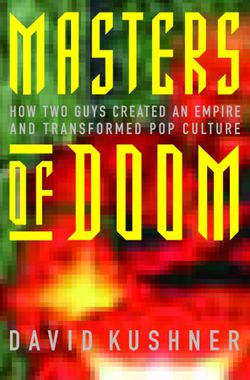 Masters of Doom: How Two Guys Created an Empire and Transformed Pop Culture is a book by David Kushner about id Software and its influence on popular culture, focusing chiefly on John Romero and John Carmack. Adopting a novel-like narrative, Kushner chronicles the lives of both men from childhood through the early successes of id Software, the new heights the company reached with Doom, on through to their separation as developers after Quake. Kushner was an early entrant into the field of video-game journalism, and recycled some of his own original reporting in the book.

In 2019, a television pilot adaptation began production for USA Network, but actor Rahul Kohli stated in April 2021 that the filmed pilot was not picked up by the network.[1]

"Masters of Doom is the amazing true story of the Lennon and McCartney of video games: John Carmack and John Romero. Together, they ruled big business. They transformed popular culture. And they provoked a national controversy. More than anything, they lived a unique and rollicking American Dream, escaping the broken homes of their youth to co-create the most notoriously successful game franchises in history—Doom and Quake—until the games they made tore them apart."
― Publisher's description

A full unabridged audio book edition was produced in 2012 by AudioBooks.com. Narrated by actor Wil Wheaton, the recording has a total duration of 12 hours and 43 minutes.

While the Doom movie was still in production, on April 13, 2005 it was announced Showtime Networks was working with executive producer Naren Shankar to develop a feature film based on Masters of Doom.[2] After the project fell through, in a June 14, 2018 interview David Kushner stated, "right now there are people interested into turning this into a TV show."[3]

In June 2019 USA Network ordered a TV pilot for an anthology series with James and Dave Franco included among its executive producers.[4] On September 26, 2019, Rhys Thomas (Saturday Night Live, Documentary Now!) was named as director with actors Eduardo Franco (Booksmart) and Patrick Gibson (The OA) named to star respectively as John Romero and John Carmark.[5] By February 2020 the pilot was in post-production.[6]

An April 2021 post on Twitter by actor Rahul Kohli (iZombie, The Haunting of Bly Manor) suggested the completed pilot was not picked up by USA Network, making it unlikely to ever air.[1]