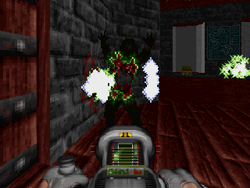 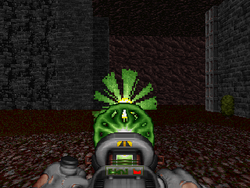 The mauler is a weapon from Strife. This is the same weapon used by templars.

The primary function of the mauler works exactly like the super shotgun from Doom II, consuming 20 energy cells to use. Human enemies are disintegrated when killed by the mauler. This is the same firing mode templars use.

The secondary function uses 30 energy cells, but shoots a large ball of energy which can kill almost anything in one hit, sometimes even inquisitors in a single hit by chance or if the inquisitor is hit dead center. The player will lose 20 health when using the secondary function. After the projectile hits something, a circle of smaller plasma balls will be fired to hit other enemies.

It is advisable to avoid firing in the secondary mode in close combat, as the initial blast can inflict significant damage back on the player. The secondary projectiles do not cause any damage, however.

This weapon's source of ammo is shared with the flamethrower.

In the IWAD the mauler is first encountered on these maps per skill level:

The IWAD contains the following numbers of maulers per skill level: