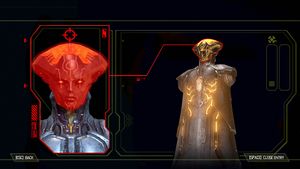 The Maykr drone's picture in the Codex. 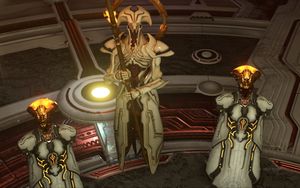 Maykr drones during the procession ritual. A Maykr angel stands between them.

The Maykr drone is an enemy introduced in Doom Eternal. The lowest-ranked known form of Maykr, they are mostly found within Urdak but also appear in the Slayer Gate challenge found in the Mars Core level. They fire sustained volleys of Argent projectiles, and feature a massive drop of ammo if killed with a headshot.

Maykr drones normally keep their distance from the player and fire volleys of weak energy blasts; up close, they release whips of light from under their shoulders and spin on the spot to push the player away. Their bodies are covered in armor that makes them fairly resistant to damage, but their heads are highly vulnerable - killing them with a headshot will release a shower of health and ammunition. The combat shotgun's Sticky Bombs and the heavy cannon's Precision Bolt are especially effective, but any weapon can yield bonus ammo as long as the fatal shot is to the head. Maykr drones are capable of dashing to the side in between volleys to evade incoming fire.

While Maykr drones often respawn during combat like fodder demons, they are actually classed as a heavy demon so three units of chainsaw fuel are required to use that weapon against them.

Drones make up the majority of Urdak's population; like most other Maykrs, they have individual identities but are biologically unable to defy an order from the Khan Maykr. As a result, they give the impression of functioning as a perfectly synchronized colony. Their bodies, referred to as being immature, are not yet able to handle the strain of inter-dimensional travel, so they never leave Urdak. 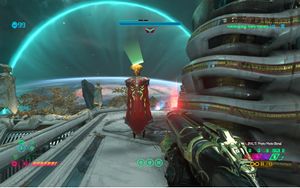 A red-armored elite Maykr drone during the battle with the Khan Maykr.

When the Doom Slayer interrupts the Maykrs' ritual to summon and then control the Icon of Sin, the Icon releases an energy wave of some kind which seems to affect all the Maykr drones at the ritual (and presumably throughout that stage). This may be why they fight as they appear to have been corrupted. Alternatively, some may simply be following the Khan Maykr's command to stop the Slayer at all costs.

The Maykr drones present during the battle against the Khan Maykr have red suits of armor, presumably representing units of an elite guard.

The Ancient Gods, Part One also introduces a stronger, heavy variant of the Maykr drone - the Blood Maykr. While being tougher, with several new powerful attacks and a shield that minimizes the damage they take, the Blood Maykr still has the same weakness to headshots as well as the bonus drops for a successful headshot kill.