Maze - BIG IS BEAUTIFUL is a single-level PWAD designed by John Bye and released in 1995. 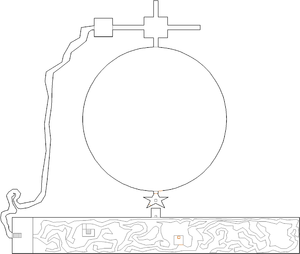 Map of Maze - BIG IS BEAUTIFUL
Letters in italics refer to marked spots on the map. Sector numbers in boldface are secrets which count toward the end-of-level tally.

As one secret (#2 above) cannot be obtained, the maximum obtainable secret percentage is 75%.

Part of the upper level of the maze (west of the exit) is detached from the rest, completely surrounded by the ceiling of the lower level. As a result, it is impossible to enter this section, and impossible to kill the imp (thing 65) in it, making 100% kills impossible.

Another imp (thing 105) on the upper level of the maze is also very hard to kill as his area is inaccessible.

The blue door leading to the exit room is only a single linedef, meaning that it is possible to enter the exit room without the key. If the blue key has been obtained, pressing the northern side of this linedef will cause most of the lower level of the maze to open and then close as a door; when neither the player nor any remaining monsters are alive on the lower level, it will shut off and become permanently inaccessible.

* The vertex count without the effect of node building is 694.