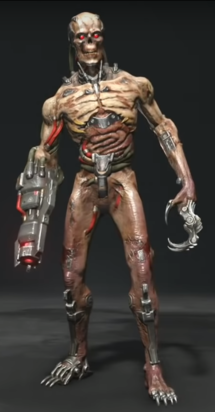 The mecha zombie is a new fodder-class enemy introduced in Doom Eternal. Its appearance suggests heavy cybernetic modifications, notably on the right arm, which has been replaced with a combined energy gun and flamethrower from the elbow down. The mecha zombie's arms are unusually proportioned, with short biceps and longer forearms along with a metal claw on its left arm. Its skull is completely bare with glowing red eyes and cables connected to its back, and its intestines are exposed.

While it is equipped with an energy gun and a flamethrower to make it more dangerous at long range, the mecha zombie is not much more threatening than the standard zombie and can be slain just as easily.