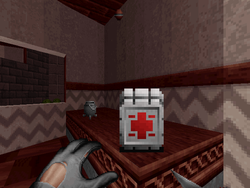 The medical kit is an item from Strife, which serves as that game's equivalent of the Doom series' medikit and the Heretic/Hexen series' Quartz Flask. Each kit restores 25% of the user's health when consumed, up to their current maximum health as dictated by the stamina stat.

Like the Quartz Flask and unlike the medikit, it is stored as an inventory item rather than being used instantly when picked up. Up to 15 kits can be carried by the player at any time.

If Auto-Health is enabled, kits in the player's inventory will be consumed automatically when the player is damaged and drops below 50% health.

In the IWAD the medical kit is first encountered on these maps per skill level:

The IWAD contains the following numbers of medical kits per skill level: