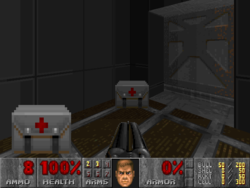 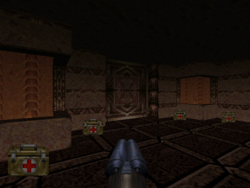 Four medikits in the starting room in Doom 64 MAP24: No Escape.

A medikit is an item that appears as large white (in Doom and Doom II) or brown (in Doom 64) box with a red cross. Picking one up will increase the player's health by 25% up to a maximum of 100%.

Medikits are not included in the items percentage displayed at the end of each level.

In the IWADs the medikit is first encountered on these maps per skill level:

The IWADs contain the following numbers of medikits per skill level:

Doom RPG contains two varieties of medikit (spelled medkit), "small" and "large". Small medkits restore 25 health points, and look like the originals except that their cross is yellow rather than red. Large medkits restore 75 points, and are red with a yellow cross.

Medkits in Doom RPG are not used as soon as they are picked up, but are added to the player's inventory to be used when needed.