Megalab is a single-level PWAD designed by Casey Miller, originally released April 30, 1994. It is a largish solo map with an E2-style "castle lab" theme; like the earlier Megawatt by the same author, it features several open areas, completely unmarked secret doors, and packs of cacodemons. 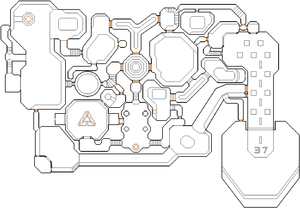 Map of Megalab
Letters in italics refer to marked spots on the map. Sector numbers in boldface are secrets which count toward the end-of-level tally.

* The vertex count without the effect of node building is 1309.