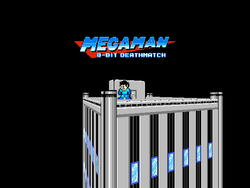 Mega Man 8-Bit Deathmatch, also abbreviated as MM8BDM, is a total conversion created by Cutmanmike and "Team Mega Man 8-Bit Deathmatch". The mod makes use of the 8-bit graphics and style of the original Mega Man series of games for the Nintendo Entertainment System while providing the first person shooter gameplay experience of the Doom series. The modification was originally for Skulltag, and moved to Zandronum after its fork.

Approximately a year of work was invested in the project. A demo version was playable at the ScrewAttack Gaming Convention on July 2-4, 2010, and the demo was released to the public on July 7. The full version, v1.0a, was officially released on October 8, 2010. It was packaged with Skulltag v0.98e Alpha. In March 2013, it became one of five indie games included in the fourth Free Bundle. As of October 23, 2020, the current version is v6.

At the 17th Annual Cacowards it was recognized as Best Multiplayer Level.

Mega Man 8-Bit Deathmatch strives to unify Doom-style game play with the Mega Man universe. All of the graphic resources have been replaced with the colorful 8-bit Mega Man series graphics, with a number of entirely new resources also added.

Every Robot Master from Mega Man 1 through 6 are implemented as playable characters, alongside several other series characters. Each possesses a number of new animations and rotation frames.

There are 60 new weapons the player can use; each Robot Master's weapon is in the game, as well as some extras. The default weapon is Mega Man's Mega Buster for all robots. Most weapons have been changed to fire projectiles rather than hitscan attacks.

A number of items are implemented in the game which the player can use to help them along. There are also surprises and unlockable features. 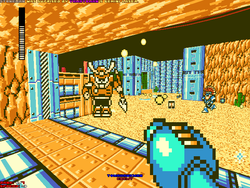 While the primary focus of the game is on the multiplayer element, the game also features a full-fledged story mode. Much like Quake III Arena's single player mode, the story mode is a campaign spanning all 53 of the deathmatch levels, plus several boss arenas.

The story takes place one year after the setting of Mega Man 6. Mega Man, the blue-suited robot protagonist of the series, has beaten Dr. Wily, the villain of the games, for the sixth time. The evil doctor is in prison after masquerading as Mr. X, the founder of the World Robot Tournament. The real Mr. X has been found and, in gratitude of being saved, he announces that he will host the official Robot Tournament. However, he decides to make some minor changes: instead of each robot using their own weapons, they have to be equipped with Mega Man's Variable Weapon System—a system that can let them use a multitude of weapons and items—as well as his default Mega Buster. This way, the robots are judged on their skill and design, rather than their default combat equipment.

Just as the tournament is getting underway, the television broadcast signal is jammed and interrupted by none other than Dr. Wily himself. He specifically addresses Dr. Light, Mega Man's creator, and Mega Man himself, telling them that he will be entering his robots into the tournament in order to reclaim his title of "World's Best Robotics Genius". He taunts Dr. Light and Mega Man, challenging them to stop him from claiming the title. Mega Man, having a strong sense of justice, decides to go participate in the tournament to make sure Wily does not disrupt it. Dr. Light allows this, but knowing Mega Man cannot possibly fight off 40 robots by himself, he also sends with Mega Man all eight (six prior to Version 3) of his old robots (the bosses from the first game). At some point, Proto Man, Mega Man's predecessor and robot of mystery, also intervenes to help lighten the load.

The game is divided into nine separate chapters, each spanning one Mega Man game with locales made to look like levels from their respective games. As well as the deathmatch levels, at the end of each chapter lies a boss fight. In most cases, the player will not be fighting a stock bot; boss battles take a bit more time and skill. The bots are quite adept at using the boss weaponry and know exactly how each one works, with few exceptions. 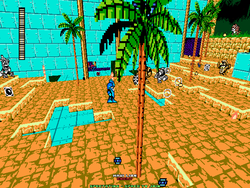 The game includes as its main draw an impressive amount of new deathmatch levels—108 in total—as well as nine capture the flag stages. The game supports several official Skulltag game modes, as well as the InstaGib modifier, but not the Buckshot modifier.

There are 108 deathmatch and 25 capture the flag levels. The deathmatch levels are the main attraction of the game, being arenas based on the various boss levels of Mega Man 1-9, plus a fortress stage.

Every robot master's weapon has been accounted for in this game from the Rolling Cutter, a boomerang-like scissor-head, to the Yamato Spear, a rapid-fire spearhead projectile. There are a few extra weapons to add even more variety.

In addition to the weaponry, the game has a number of helpful items that can give players the edge over their opponents

The only destroyable enemies placed in normal levels are the 100 Watton and Dompan, both in Bright Man's level, which turn off and turn on the lights respectively. In certain boss fights, Mets, little helmeted fellows that spit bullets at you, can also be seen. Otherwise, the game is devoid of standard enemies.

However, the game does feature a number of bosses and mini-bosses based on similar encounters found within the Mega Man universe.

In addition to the bosses, if certain requirements are met, the player can fight several mini-bosses. Beat them, and their weapon is obtained for the rest of the chapter.