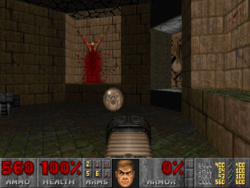 A megasphere is among the stockpile of items in the first room of Doom II MAP30: Icon of Sin.

Megaspheres in Doom 64 display a helmet similar to the player's, rather than a demonic face.

The megasphere is a gray-brown orb with a snarling demonic face (similar to that of the mancubus). Picking it up maxes out both the player's health and armor to 200%. The armor given by a megasphere is equivalent to blue armor.

The game manual states that megaspheres "combine the power of combat armor with the benefits of a Soul Sphere". However, this is incorrect, as soul spheres will add a maximum of 100 points to the player's current health.

Megaspheres are included in the items percentage displayed at the end of each level.

In the IWADs the megasphere is first encountered on these maps per skill level:

The IWADs contain the following numbers of megaspheres per skill level: