Megawatt (MEGAWATT.WAD) is a single-level PWAD designed by Casey Miller. It was originally released April 3, 1994, and stood out from its contemporaries due to its size and difficulty. A revised version with bug fixes and difficulty settings followed a few weeks later (that file's time stamp is April 18).

A modified version of this level appears as E1M4 in the 1995 WAD compilation, Heroes. 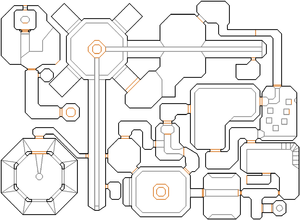 Map of Megawatt
Letters in italics refer to marked spots on the map. Sector numbers in boldface are secrets which count toward the end-of-level tally.

It is possible to get trapped if you jump down to the yellow key area without having first approached the teleporter to open up the door at the top of the nearby lift (sector 85). This bug is fixed in the version that appears in Heroes.