Memento Mori (MM.WAD) is a 1995 megawad that contains 32 new levels, designed by two members of the Innocent Crew, Denis and Thomas Möller, along with 19 other authors, including Tom Mustaine and both Dario and Milo Casali - this made it by far the largest collaborative project up to that point. It was initially released on December 10, 1995, and saw an updated release in February 1996. In contrast to most megawads, it is designed especially for cooperative multiplayer gameplay, although it can be played in single-player as well. It is also one of the few PWADs that are allowed to be used in Compet-N speedruns. The phrase Memento Mori is Latin and is translated as "Remember that you will die" or "Remember death".

The music is an original soundtrack composed by Mark Klem, who also designed one level and co-designed another. The soundtrack is provided as a separate music pack file named MMMUS.WAD.

A sequel, Memento Mori II, was developed and released in 1996.

The WAD is available in both segmented and complete forms. The segmented version is split into three archive files (mm1_3up.zip, mm2_3up.zip and mm3_3up.zip), each intended to fit in the 1.44 megabyte storage of a 3½-inch floppy disk. Once all three segments are downloaded, the user must extract them all into a single directory, run INSTALL.EXE, and specify the drive and path of their Doom II directory to install the complete WAD. This version has two options for play: STARTMM.BAT, a batch file which starts Doom II with both the main WAD and the music WAD loaded; and MM.EXE, a multiplayer-oriented frontend which allows to player to enable or disable cheat codes and the new soundtrack, and then run DeathManager! with both WADs loaded. All programs and batch files in this version will only run in DOS, and thus require the use of DOSBox on modern operating systems.

The complete form was made available for players who could not use the segmented version, such as Macintosh users. It is stored in mm_allup.zip and merely requires the user to extract the archive file into their Doom II directory to play. Users on modern operating systems are strongly recommended to use this version, and load both files in the source port of their choice. 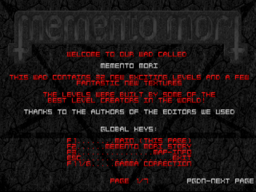 The initial screen of the infopack.

In addition to the WAD itself, an "infopack" exists for Memento Mori which takes the form of a DOS program. Thus, DOSBox is required to run it on modern operating systems. It was written by Denis Möller and is stored in the file mminfoup.zip. Users of the infopack can access development credits, installation instructions, the WAD's story, and information on all 32 levels. Mark Klem's "The Wind", the music of MAP10: The Mansion and MAP24: Diehard, plays on an endless loop while this program is running if a sound card is detected. This can be disabled by starting the infopack with the command line parameter "-nosound".

The story of this WAD is contained only in the infopack, and was written by Alden Bates, creator of MAP10: The Mansion. It is presented in the second person, as with all official Doom story materials.

According to the story, the WAD takes place one year after the events of Doom II. Hell's invasion of Earth has left three quarters of the human race dead. Nuclear warheads carried by colony ships were used to seal the portals of Hell, leaving most of Earth uninhabitable. Now, Doom's protagonist is in his home town, where the invasion began, to assist in the planetary reconstruction effort. This seems to be progressing smoothly, with a jury-rigged radio in a makeshift headquarters set up to enable communication between cities.

On day 372 of reconstruction, however, a message arrives from headquarters: contact was lost with a city in the center of the United States. Subsequent reports from ill-fated scouts reveal widespread violence and destruction caused by demonic figures. It seems there is one portal from Hell remaining, one missed during the twilight of the invasion. Satellite imagery reveals that this portal is in the center of the city.

The protagonist, the only man with enough experience fighting Hellspawn, is recruited to track down and destroy the portal, and then slaughter the demonic horde that arrived through it. He is flown by a salvaged helicopter to the city, as close to the portal as possible. As soon as it turns to leave, it is shot down by a rocket. The protagonist must complete his mission alone.

This WAD features a full set of built-in demos. As befits the megawad's focus, all of them are two-player cooperative demos, which end without either player dying or completing the level. It is unknown who either player is. All demos require Doom II v1.9 for viewing. The demo levels are:

The Compet-n episode records for Memento Mori are: