Memento Mori II (MM2.WAD) is a 1996 megawad that contains 32 new levels, plus two top-secret levels that are not contained in the WAD file itself (see Accessing the top-secret levels). Released on July 27, 1996, it is the sequel to the 1995 megawad Memento Mori, with many of the same designers involved, including Denis and Thomas Möller of the Innocent Crew. Like its predecessor, and in contrast to most megawads, it is designed especially for cooperative multiplayer gameplay, although it can be played in single-player as well. It is also one of the few PWADs that are allowed to be used in Compet-N speedruns.

The Memento Mori II soundtrack was created by Mark Klem and David Shaw (Tolwyn), and is provided as a separate music pack file named MM2MUS.WAD. Both artists released remastered versions of the tracks on the original version of MP3.com in 1999. The remastered songs can now be downloaded from Shaw's website, Tolwyn.com.

The WAD is available in both segmented and complete forms. The segmented version is split into three archive files (mm2_1.zip, mm2_2.zip and mm2_3.zip), each intended to fit in the 1.44 megabyte storage of a 3½-inch floppy disk. Once all three segments are downloaded, the user must extract them all into a single directory and run MM2INST.BAT to unify and extract the segmented archive. After the WAD is installed, the user may run MM2.BAT to play the WAD in Doom II with both the main and music WADs without manually specifying them. All batch files in this version will only run in DOS, and thus require the use of DOSBox on modern operating systems.

The complete form is available in mm2.zip and merely requires the user to extract the archive file into their Doom II directory to play. Users on modern operating systems are strongly recommended to use this version, and load both files in the source port of their choice.

Like Memento Mori, this WAD has a story written by Alden Bates, creator of MAP20: The Experiment. Unlike the previous Memento Mori's story, it is available in the WAD's text file as well as the infopack.

Memento Mori II takes place "almost two years" since the events of Doom II, and "almost a year" after the events of Memento Mori. Since the destruction of the last portal from Hell, the reconstruction of the devastated Earth has gone smoothly; contact has been restored with the outer colonies of Earth. On day 727 of the effort, Doom's protagonist, overseeing the construction of suburban homes, is visited by a car carrying General Kimmel and Lieutenant Bates. The protagonist is ordered into the General's car, where the Lieutenant gives a prepared briefing. Headquarters has had contact with the colony on Io, one of the moons of Jupiter, since three weeks prior, where they learned the colony was starting to run low on supplies and received "anomalous readings" from their last probe to Jupiter. No further communications were heard until a distress call came from the Io colony.

Following this, headquarters dispatched a team of agents to scout Io; they arrived about a week prior to the briefing, and reports started to come in two days before. Many have not come back. It would appear that Hellspawn have infested Io, and it is up to the protagonist to kill them. A ship is ready to take him to Io in the next hour, with little available weight and space meaning supplies are limited.

Faced with the choice of remaining on Earth for the reconstruction effort or being trapped on Io "with only a pistol and the cries of the dead to keep [him] company," the protagonist agrees to take on the mission. He opens a metal box on the seat next to him to reveal the briefing module, a notebook computer containing the scouts' reports, which reveals the mission is codenamed "Memento Mori, Operation Two" (Memento Mori was "Operation One"). The General translates the Latin name as "a death's head, a reminder of those who died in the invasion." 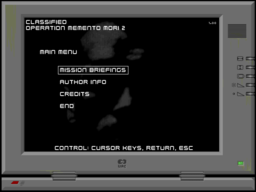 The main menu of the infopack.

Like the previous Memento Mori, Memento Mori II has an "infopack" available separately from the WAD itself, contained in the archive file mm2info.zip. Also like Memento Mori's infopack, it is a DOS program, meaning it must be run in DOSBox on modern operating systems. Unlike the previous infopack, however, it is presented in an in-character fashion as the briefing module from the story. When the program starts up, the user is presented with the full story of the WAD, three screens long, which can be paged through using any key. Following this, a UAC computer console appears on the screen, showing the booting of the fictional operating system UAC OS. After the boot sequence is completed, the user is confronted with a password prompt to access classified information on "Operation Memento Mori 2", and must press any five keys on their keyboard to enter it. It does not have to be a letter or number key; the Tab, Enter, Backspace, Insert, Delete, Home, End, Page Up, Page Down and arrow keys can be used, as well as the function keys and even the Escape key. In fact, all of those but Tab, Enter, Backspace and Escape are registered as two key presses. Following this, the data is loaded and the main menu is shown.

From the main menu, the user can access mission briefings from the agents on Io (level information), author info, and the WAD's credits, or exit the program. David Shaw's "Mizshunn Impassable", the music of MAP32: Dances with Demons, plays on an endless loop while the program is running if a sound card is detected. Like the previous infopack, the program was written by Denis Möller.

Unlike with Memento Mori, the infopack's data file (MM2INFO.DAT) is in WAD format. Knowing this is key to accessing the top-secret levels.

In addition to the standard set of thirty-two levels, there are two additional "outtake" levels that were designed for this megawad but are not contained in the main WAD file. They are located inside the Memento Mori II infopack within its data file MM2INFO.DAT. The user must rename the file to MM2INFO.WAD and load it alongside the rest of the megawad's files in their engine of choice. When this is done, the two top-secret levels will be loaded into the game for play, replacing MAP01: Outpost and MAP02: The Feeding Pit.

As with the previous entry, this WAD features a full set of built-in demos. Unlike Memento Mori, however, all of them are single-player playthroughs. DEMO1 and DEMO3 end with the player's death, while DEMO2 ends in the middle of play without the player dying or winning. It is unknown who recorded each demo, although his credit for "misc stuff" suggests it was probably Denis Möller. All demos require Doom II v1.9 for viewing. The demo levels are:

The Compet-n episode records for Memento Mori II are:

Attempting to play Memento Mori II in the official Apple Macintosh port of Doom II will crash the program because of a PNAMES entry for WALL24_1, a missing patch. An official bugfix WAD was uploaded to the idgames archive a day later in mm2mcfix.zip. Loading the patch file MM2MCFIX.WAD after both of the normal files will replace the PNAMES lump with a version that removes the offending entry and allows the megawad to be played in the Macintosh port.