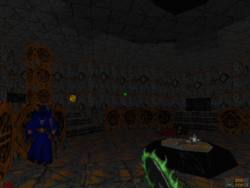 Menelkir facing the player in his tomb.

Menelkir, Arch-Mage of the Arcanum, sold out Cronos along with Traductus and Zedek to Korax. He now serves as one of Korax's top lieutenants and is one of the second last bosses which the player must defeat before proceeding to the final encounter with the serpent rider. He can be battled at any time in the fifth hub, Necropolis. According to the manual:

"The greatest Mage to occupy the Crystal Dais in centuries, it seems unlikely that Menelkir can be destroyed by any conventional force. Fighting him will be one of the greatest challenges of your life."
― Hexen instruction manual

Like Zedek and Traductus, Menelkir uses the fourth weapon of his specific class, in this case the Bloodscourge as used by the Mage, making him extremely dangerous. The fireballs home in on the player, but can be easily deflected with Discs of Repulsion. Like the other class-bosses in Hexen, Menelkir can move around in erratic strafing-like patterns in battle, making him harder to hit. He has 800 hit points in single player, but quintuples this to a massive 4000 points in cooperative multiplayer games, regardless of the number of players in the game.

As with the other mirror match bosses, it is usually advisable to go for a quick kill when dealing with Menelkir, and get a first strike on his back if possible. It is possible to turn his shots back against him with a Disc of Repulsion or, in a mage versus mage battle, an Icon of the Defender.