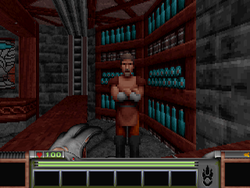 The Tarnhill barkeep is the first merchant most players will meet.

The merchant is a series of four actor types in Strife: Quest for the Sigil which differ only by color palette. These actors variously serve via the game's conversation system as a variety of characters, including shop keepers, medics, weapon smiths and bowyers, barkeeps, and important members of the Front. Merchants appear as bearded, middle-aged men with varying hair colors wearing a shirt, pants, black boots, forearm bands, and an apron.

While idle, merchants will randomly transition between states where they look from side to side or cross their arms and tap their foot in a seemingly impatient manner. When interacting with the player in dialog, the merchant will extend his arms wide in a gesture of greeting. If the player dismisses a dialog with a merchant, he will appear to motion with his thumb as if telling the player to "get lost." If alerted via any aggressive noise or if directly damaged by any attack, the merchant will appear to duck down (in the case of the barkeep actor, this will be accompanied by the sound of glasses clanking together), and all doors tagged with the tag 999 in the level will blaze shut at a speed of eight units per tic and will remain closed for a minimum of 120 seconds (2 minutes – continuing to set off the alarm can extend this for an indefinite period of time). This will always set off the alarm if the damage was taken from a player attack, even if the punch dagger or poison bolts are used. Once the alarm state has worn off, the shop doors will reopen at a speed of 2 units per tic and will remain open so long as the alarm is not retriggered.

While merchants have a vast amount of health, they are in fact also completely invulnerable. A special case in the P_DamageMobj function will place them into their pain state in response to any damage and then return from the function without dealing damage. However, this does mean that use of the stonecold cheat will permanently stun all merchants, denying the player of their services. This is addressed in Strife: Veteran Edition by exempting non-enemy objects from the effects of the stonecold cheat.

In the IWAD merchants are first encountered on these maps per skill level:

The IWAD contains the following numbers of merchants per skill level:

In Strife: Veteran Edition, a merchant serves as the helper in the game's advanced graphical frontend, giving tips on options and settings and even throwing in a few bits of lore. He reacts to the changing of settings, and, as a small form of Easter egg, if he is clicked on, he will react as if though he was attacked. He was inspired by the Office Assistant[1] and is, as a nod to that misfeature, often times overly verbose or insistent on stating facts that are completely obvious.