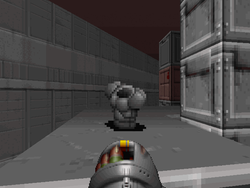 A suit of metal armor.

The metal armor is an item from Strife which is functionally identical to Doom's megaarmor. When used it boosts the player's armor percentage to 200%, unless their current armor is already at that value. Metal armor will absorb one-half (1/2) of all damage dealt to the player until it wears out.

Up to three suits of metal armor can be held in the player's inventory at any time, not including the one they are wearing. They can be found in many levels of Strife, and are also sold by armorers in exchange for gold.

In the IWAD the metal armor is first encountered on these maps per skill level:

The IWAD contains the following numbers of metal armors per skill level: