Miasma is a single-level PWAD for Doom II and a Boom-compatible source port that was released in December 2016. It was created by Thomas Seifert (tourniquet) and uses the music track "The Mucus Flow" by B.P.R.D. Additionally, it includes "Press Fire" from Shadow of the Beast II for the title screen and "Save Room" from Resident Evil during intermission.

Miasma was awarded a Cacoward in 2016, and was featured in Doomworld's Top 100 Most Memorable Maps, placing 89th. 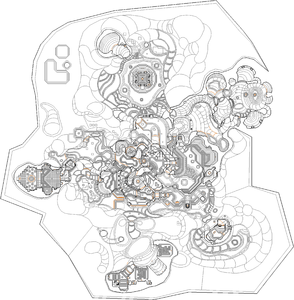 Map of Miasma
Letters in italics refer to marked spots on the map. Sector numbers in boldface are secrets which count toward the end-of-level tally.

* The vertex count without the effect of node building is 35054.