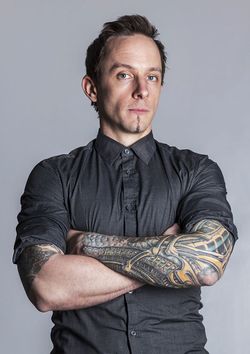 Michael John "Mick" Gordon (born 9 July 1985) is an Australian composer and sound designer, composing music primarily for video games. He has been active in the industry since 2002. He is most notable in the Doom universe for composing the soundtracks for Doom (2016) and Doom Eternal. Other video games Gordon has composed for include LawBreakers, Wolfenstein: The New Order, Wolfenstein: The Old Blood, Prey, and the first and second seasons of the 2013 fighting game Killer Instinct.

Gordon first began work as a sound designer with Pandemic Studios, where he contributed additional sound design for Destroy All Humans! 2. His involvement with Bethesda began with the action-adventure first-person shooter Wolfenstein: The New Order, developed by MachineGames. He returned to the Wolfenstein series in 2015 to compose the score for Wolfenstein: The Old Blood.

In 2016, Gordon composed the score and soundtrack for the science fiction first-person shooter, Doom, a sequel to the 1993 game developed by id Software. His score for Doom won a number of awards including a DICE Award for Outstanding Achievement in Original Music Composition, SXSW Gaming Award for Excellence in Musical Score, The Game Awards' Best Music/Sound Design, and was nominated for a BAFTA Games Award for Best Music.[1]

According to Mick Gordon's official website, Gordon "utilises a broad range of modern musical sound design and traditional composition techniques in order to be unconstrained by any singular genre," and that it is "inspired by the connection between the audience and the experience."[1]

Gordon's work "considers the role of music as a translation of the world in which it exists rather than a simple accompaniment."[1]