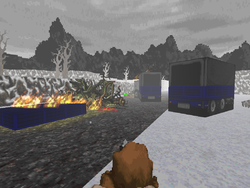 Midgard Outlaw is a total conversion for GZDoom/Doom II developed and released by Mike MacDee (Impie) in 2017. It is an 11-map sequel episode to Project Einherjar, released a year earlier: both projects are based on a dystopian novel series, Last of the Ghost Lions, set in the same universe. The gameplay involves lots of fast, brutal shootouts with enemies that die relatively easily, but can badly injure the careless player. Midgard Outlaw uses the same weapons and enemies from Project Einherjar, but adds several new foes, as well as a dynamic music gimmick: the soundtrack is comprised of ogg vorbis instead of midi, and switches from calm to intense at certain points during each mission. Unlike its sci-fi heavy predecessor, Midgard Outlaw has almost no sci-fi elements apart from the dystopian setting, focusing on an action movie motif instead. It also features a secret level, unlike the original.

Once again the player takes control of the novel series protagonist, Juno, in the postnuclear nation of Midgard. Having saved the world from another nuclear holocaust at the end of Project Einherjar, Juno is now retired and living on a weighty pension, but is unfulfilled with her inactive life. She is hired by Commander Dawn to escort arms dealer and war criminal Dietrich Drogo to his home country of Normady to stand trial, but en route to the trial the convoy is hit, Drogo is rescued, and Juno is used as a scapegoat. Now Public Enemy Number One in a foreign country, Juno must follow Drogo's trail and recapture him to clear her name, fighting criminals and corrupt police along the way.

The new common foes in Midgard Outlaw are male and female members of the Norman military: female riflemen, male shotgunners with heavy armor, and even submariners with deadly harpoon guns. At several points Juno faces one or more Norman tanks as bosses. These foes are joined by the common enemies of Project Einherjar as well.

Midgard Outlaw was designed around the inspirational music playlist Impie listens to while editing the Last of the Ghost Lions book series, to make a more authentic WAJ experience for the player. The original mod used various tunes from action movies/games to complement its 80's action movie vibe, but this was changed later to make the mod more youtube/twitch friendly.