Seven Doom characters were built as sculptures during the development of Doom. The first models - the Doomguy, baron of Hell and cyberdemon - were sculpted by Adrian Carmack. Working on them proved to be more time-consuming than he expected; for this reason, id Software eventually hired Gregor Punchatz, owner of the TXFX company, to build the rest of the models (the arch-vile, mancubus, revenant and spiderdemon). Although all of the monsters modeled by Punchatz were initially intended to appear in the first game, only the spiderdemon would actually appear there; the others were finished during the development of Doom II.

Translating the modeled characters into the game was a relatively straightforward task. The sculptures were first captured from eight different angles using a video camera and John Carmack's program, Fuzzy Pumper Palette Shop. The scans were then finished by rescaling, recoloring and animating them in the Doom engine's 256 colour graphics format. This procedure saved Adrian and assistant artist Kevin Cloud a lot of work, as they only had to draw a few character sprite sets from scratch.

The TXFX models which survive today are not fully original. According to Punchatz, the models suffered various forms of damage (mostly tearing of the latex skin away from the supporting skeleton) during id's process of posing and photographing the models. At id's request, he completed a set of new skins for the models which they now wear.[1] These skins differ from the originals in various ways:

Punchatz would later also be commissioned to create a series of similar models for the monster designs of Doom 64. These models underwent a slightly different process, in that they were used as reference for creation of high-resolution computer models by the Midway Games artists, and the digital versions were then used to generate the game's final sprites.

Clay models were also created for the development of Doom 3, by Kenneth Scott, Seneca Menard, and other members of the Doom 3 art team. Since the game uses 3D meshes for the characters, not sprites, the models were not created to be photographed and generally only one half of the monster was actually created. However, working with physical clay models allowed to refine the design of the creatures much more quickly and simply than what was possible digitally on the computer hardware of the era. The final design was then replicated in ZBrush, and from there simplified into the in-game models.[2] 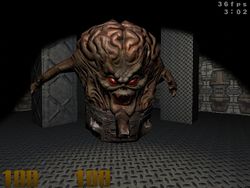 According to Kenneth Scott, a process similar to that used for Doom was initially considered for use with Doom 3, where full physical models of the enemies would be scanned to create 3D models. To test this process, the first model using normal maps created for Doom 3 was derived from a partial scan of Gregor Punchatz's spider mastermind model.[3]