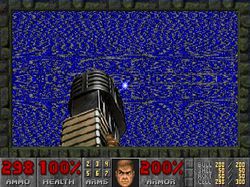 In Doom versions before v1.4, the Moiré error is a bug that took effect when the player got close to a wall in a room with a ceiling 560 units or higher. The screen would flash in a pattern quasi-randomly, although it got worse the taller the room was.

It was fixed in version 1.4 for areas of reasonable height; however, a more severe version of this glitch, associated with areas of more extreme height, remained through v1.9.

The pattern which appears in the Moiré error is the flat of a neighboring sector being tiled to "infinity" (though once the drawing of a floor or ceiling passes the viewpoint's center, it effectively becomes the opposite type of surface and begins to scale back toward the viewpoint). This is caused by numeric overflow in the drawing of one or more linedefs in the offending sector, resulting in a situation which is technically similar to a slime trail, but covering a large portion of the screen.

A video demonstrating this error is available at YouTube.