"The Delta Complex isn't safe. You're crazy if you're going there!"
― T. Ryan [source]

Monorail: Facility Transport is the fourteenth level of Doom 3. Player must take it to reach the Delta Labs by monorail. Commando zombies first appear here in a cutscene at the beginning of the level. It is part of the Site 2 location, and the only part of it realized in Doom 3 or any of its expansions.

The marine starts at the recycling facility boarding platform of the monorail, with a monorail car available to use. Upon getting into the car and using a control panel to ride it, the marine meets a scientist named T. Ryan, who previously locked himself in a section of the car. T. Ryan tells the marine that his partner went out to check what was going on and never came back, and that the invasion may have been caused by the artifacts they dug up in Site 2.

The monorail car arrives at the Site 2 boarding platform and the announcer says that the monorail airlock systems are locked here. To ride the monorail further, the marine needs to go to the airlock control room and manually open the airlock junction. The marine goes through a garage-like transfer area, and finds the control room on the second floor, but a security code is required to unlock the junction. The PDA with the security code is located on the floor near a small ladder near the beginning of the transfer area. The code is 826. After the marine unlocks the junction by entering the code, he returns to the monorail car and find that the scientist has been killed by a trite.

The marine boards the monorail again, but the ride is interrupted very soon: one of the airlock door fails to open and the car rams into it. The marine, however, survives the crash without a scratch and gets out of the vehicle. After proceeding further, the marine finds themself near the entrance to the Delta Labs, however the room with airlock leading to them is being guarded by an automated machine gun turret, which targets both the monsters and the marine. The marine needs to wait for it to wipe all the enemies in the room, then quickly run to the security room where it can be disabled via a control panel. After disabling the turret the marine uses the airlock to enter the Delta Labs.

The enemy count on Nightmare is the same as on Veteran. There are no changes in the enemy amount in the BFG Edition.

There are also two health stations on the level, one with 80 health in reserve, and one with 24 health (both have 100 health in BFG Edition). 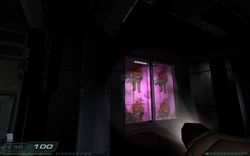 It is possible to witness a picture of a classic zombieman. This is possible by activating the noclip cheat and moving to the cinematic area where Betruger transforms a marine into a commando. The picture is located on one of the glass panels, and can only be seen if the flashlight is shone at the glass. This secret Easter egg is not accessible in versions of the game which do not allow access to the console, such as the original Xbox port, other console ports, or the 2019 re-release of the game for PC.