The WAD includes a DeHackEd lump to provide one new enemy: an attack dog. It replaces the dead lost soul and Wolfenstein SS.

Monster Hunter Ltd. Part I was featured in Doomworld's Top 100 Most Memorable Maps, placing 73rd together with Part II. 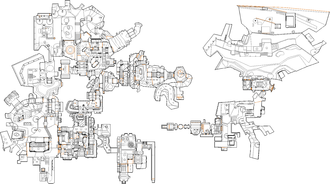 Map of Monster Hunter Ltd. Part I
Letters in italics refer to marked spots on the map. Sector, thing, and linedef numbers in boldface are secrets which count toward the end-of-level tally.

* The vertex count without the effect of node building is 16541.