The WAD includes a DeHackEd lump to provide one new opponent: a tornado. It replaces Commander Keen.

Monster Hunter Ltd. Part II was featured in Doomworld's Top 100 Most Memorable Maps, placing 73rd together with Part I. 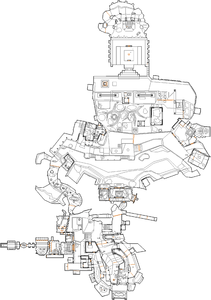 Map of Monster Hunter Ltd. Part II
Letters in italics refer to marked spots on the map. Sector, thing, and linedef numbers in boldface are secrets which count toward the end-of-level tally.

* The vertex count without the effect of node building is 8531.