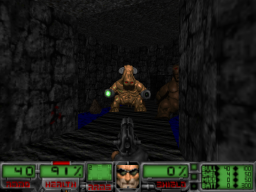 A monstruct ready to fire at the player.

The monstruct is an enemy from Hacx. It is a huge and slow mutant which possesses 400 hit points and is armed with two plasma cannons and a machine gun on its head.

While the monstruct's health is somewhat low, its attacks are deadly. A monstruct will start firing two waves of plasma orbs at a target. These orbs are extremely fast, hard to dodge, and do significant damage, to the point one of them can kill a player with 100% health. They also have a high splash damage. If anything managed to survive from its attack, the monstruct will start firing his machine gun at the target until it moves out of sight. It is recommended to attack these mutants as quickly as possible to prevent them from attacking.

There is also a rare variant of this creature disguised as a statue. Shooting the statue will activate it. This version of the monstruct features more health than the normal version, but has a considerably higher pain chance. Its pain graphic seems to be incorrect.

Also, note that the monstruct is actually not invulnerable to the splash damage of his own projectiles. If the projectiles explode near him, he will most likely be killed by the explosion.