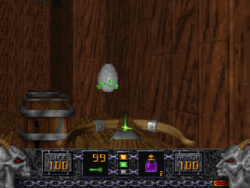 Torpol's Morph Ovum in Heretic is different from the other artifacts. When it is used, several projectiles, which look like eggs, are fired in a spread, similar to that of the Ethereal Crossbow. Monsters hit by one of the projectiles will transform into a chicken. In this state, they become very easy for the player to kill.

If the player gets hit by a morph ovum projectile, they will transform into a chicken, and will have only 30% of their health. They cannot go over that limit and are more vulnerable to enemies. There is an advantage to this state in that the small size allows the player to go under low ceiling areas which would otherwise not be reachable. While in the chicken state, the player has a very weak "pecking" attack that deals 1-4 damage and is unable to use any equipped weapons. However, if you can kill a player while being a chicken, or get hit by another morph ovum while already transformed, you turn into a super chicken. Once you become a super chicken, your beak deals 4-32 damage. In addition, the small size and extremely fast movement of a player turned into a chicken can make for a difficult target during deathmatch.

The effect of the morph ovum wears off after 40 seconds, returning players and monsters back to normal after a while. Health for players returns to 100%.

The Morph Ovum is useless against Iron liches, Maulotaurs, and D'Sparil (and his Chaos Serpent).

Players who have been transformed into chickens by the Morph Ovum may return to their normal state immediately by using a Tome of Power if one is available.

In the IWADs the morph ovum is first encountered on these maps per skill level:

The IWADs contain the following numbers of morph ovums per skill level: