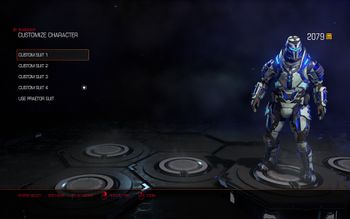 Multiplayer armor exists in Doom (2016) as a cosmetic customization system for the player. Unlockable sets of armor can be combined piece-wise along with application of paints, patterns, and optional distressing to create a totally unique appearance. The armor sets can also be used in SnapMap.

Each of the eight armor sets has its own base layer. Each armor style in these sets (four in each set) determines the shape and form of the armor, and has five independent parts which overlay the base layer: helmet, torso, left arm, right arm, and legs. Pattern variants change the color and pattern point locations and designs for their style, but do not further alter the form of the armor.

At launch the game included five armor sets. One additional armor set was added in each of the three downloadable content packs for the game, but these have since been merged into the base game as of update 6.66. Information given below indicates the expansion pack in which the armor originated. Since the merge, all armor styles and parts are now unlocked through a unified multiplayer progression system wherein each part is purchased using points earned by completing challenges or by ranking up.