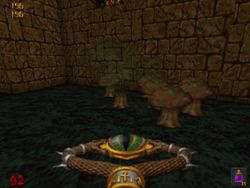 Mushrooms in Hexen: Deathkings of the Dark Citadel's Hub 3: Chantry

Hexen continues the tradition of inanimate, hazardous things from Doom and Heretic with the poisonous mushroom.

These mushrooms are mottled brown with green spots. They are bursting with poisonous gas. Periodically, they visibly swell and make a high-pitched chirp. These characteristics help differentiate exploding mushrooms from their purely decorative cousins.

When the mushroom is destroyed, its poison is released in a cloud of gas. This is the same gas that is released when the cleric uses a fléchette, however, unlike the cleric's clouds, they will not leave their point of origin when hit by a Disc of Repulsion. Players who come in contact with the gas will emit a hacking cough and suffer gradual poison damage; monsters who wander into the cloud will also be injured.

In the IWADs the mushroom is first encountered on these maps per skill level:

The IWADs contain the following numbers of mushrooms per skill level: