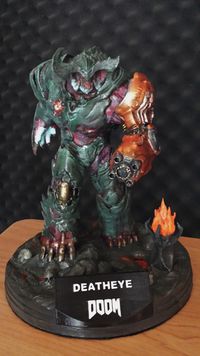 One of the ten awards won by Doomworld Forums user Deatheye.

The MyMiniFactory Cyberdemon is a 3D printer program which creates a replica of the cyberdemon from Doom (2016), licensed by id Software, designed by Ricardo Salomao, and painted and finished by Sarah Wade for MyMiniFactory in 2016 to promote the then-upcoming release of the game. A contest was announced on the @DOOM Twitter feed on April 15, 2016, encouraging players participating in the open beta to send screen shots or animated GIF files of their "best moments" in the game in order to enter the contest to receive a free printed and painted copy of the statue customized with their name or gaming handle.[1] Ten winners were chosen and were to originally be announced on April 25, but this was delayed until April 29 due to the volume of entries received.[2][3] The printing plan is currently available for free from the MyMiniFactory website.