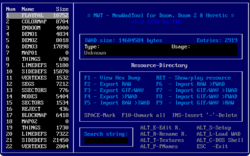 New WAD Tool (NWT) is a DOS WAD editor for Doom, Doom II, and Heretic, created by Denis Moeller of The Innocent Crew in 1996. Much like DeuTex, it can be used to add, edit, and replace lumps inside a WAD file. NWT also has the capability to edit TEXTURE1 and TEXTURE2 and PNAMES lumps, view graphics, listen to sound resources and clean WAD files (much like Cleanwad).

In addition to presenting an interactive editor, NWT also has a number of command line options. Some of these were used for vanilla mods (such as TiC's own Obituary) as an alternative to the more common DeuSF:

-file
Loads a different WAD file instead of the IWAD file (NWT usually looks for DOOM.WAD or DOOM2.WAD).

-c
"Cleans" a WAD file by rebuilding it from scratch to not include any redundant data.

-as
Adds sprites to PWAD file.

-merge
Merges a PWAD file into the IWAD file. This is used for mods which contain replacement sprites, something that can only be done with vanilla Doom by modifying the IWAD.

A beta version of NWT 1.4 was released that was described as a "pro" version. This fixed some of the limits of version 1.3 and claimed support for Hexen and Strife (the IWADs for which could not be loaded with 1.3).

The most significant change with this release was the addition of a second pane for viewing an IWAD and PWAD side by side, making it reminiscent of an orthodox file manager like Norton Commander.