Napalm is a single-level PWAD for TNT: Evilution meant for limit removing source ports. It was designed by Alexander S. (Eternal) and uses the music track "Hell" by Jeremy Doyle, originally from Icarus: Alien Vanguard. It is set in a mountainous techbase and offers a variable environment with several details such as a highway and vehicles built with sectors. 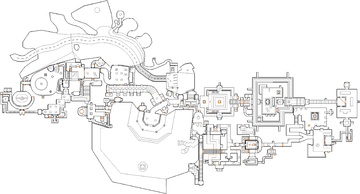 Map of Napalm
Letters in italics refer to marked spots on the map. Sector, thing, and linedef numbers in boldface are secrets which count toward the end-of-level tally.

* The vertex count without the effect of node building is 6483.