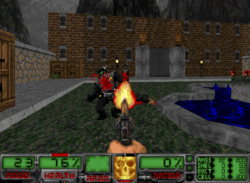 Nerves of Steel is a 3-episode total conversion for ZDoom/Doom II developed and released by Mike MacDee (Impie) in the summer of 2015. It features 18 new maps and a totally replaced roster of weapons and enemies. It is a remake of the Rainmaker Software game of the same name, as a creative exercise (and also as a means to spite the ineptitude of the original game).

Since creating Nerves of Steel, Impie has made a number of mods based on other games. NoS is considered the first of the DOSworld series, which recreates terrible DOS shooters as Doom mods.

The player controls one of two "Tunnel Rats", military operatives who specialize in the infiltration and subsequent destruction of heavily fortified bases. The setting is an alternate history version of the early 2000's, when Southeast Asia is taken over by a maniacal Japanese dictator known only as Aniki, who threatens to continue his plans of conquest until he is stopped. The Tunnel Rats -- Gale Torrez and Bobby Storm -- are sent to each of Aniki's vital bases to cripple his army and ultimately assassinate him.

All three episodes feature futuristic bases set in different environments. Episode 1 is comprised of brick buildings in the heart of Osaka which hide sleek cyborg factories. Episode 2 takes place in the jungles of Vietnam, where many of the bases are disguised as run-down wooden forts. Episode 3 is set in Aniki's samurai-styled palace in the Ryukyu Islands, and is the most lavish of the three. Each episode is 6 maps long, and each map is a reinterpretation of its counterpart in the original Nerves of Steel.

The player can choose to play as Gale or Bobby for each episode. The choice is purely a matter of gender preference, as both have identical stats and equipment.

The entire bestiary has been replaced with modified creatures from Realm 667. The most common are the Red Moon Stormtroopers, who wield AK47s and travel in squads -- they are very aggressive and can shred the player's health quickly. The mod also features killer dogs, jetpack commandoes, cyborg warriors that flee when hurt, teleporting mutants, giant thugs with dual miniguns, and a mutant that moves fast and throws alarmingly deadly fireballs. Each episode concludes with a notably treacherous boss battle.