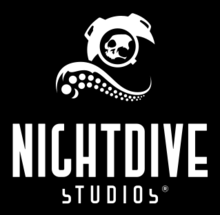 Nightdive Studios, Inc. (previously known as Night Dive Studios, LLC) is a video game development company that was created in 2013 by designer Stephen Kick. Nightdive Studios is registered in Washington State and officially located in Vancouver. The company is known for obtaining rights to classic games that are no longer available, updating them for compatibility with modern platforms, and re-releasing them.

Nightdive Studios is notable in the Doom community for obtaining the rights to Strife in 2014, and organizing the development of a re-release with an updated engine titled Strife: Veteran Edition. The company has also cooperated with id Software and Bethesda on an updated re-release of Doom 64 which was released in 2020.