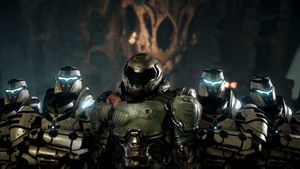 The Night Sentinels, first mentioned in Doom (2016) and later encountered in Doom Eternal, were the military force of Sentinel Prime, who acted as guardians of the City of Argent D'Nur and of the Wraiths prior to their civilization's fall to the forces of Hell. They appeared as technologically advanced knights wearing powered suits of white armor and primarily attacked with sword- and spear-like weapons. According to the lord of the Fourth Age of Hell, the Doom Slayer "wore the crown" of the Night Sentinels, and thus may have been considered their leader.

The Order of the Deag was founded as a priesthood to tend to the Wraiths, which the people of Argent D'Nur both worshipped and feared. Through immersion in the Wraithcall, the people of Argent D'Nur mastered both magic and technology, and combined them. Together, these made the Night Sentinels, the core of the legions of the Argenta, a powerful force with which to be reckoned.

In a period known as the Time of Grief, during the rule of King Etrex, the Argenta first made contact with the Maykrs, who brought many gifts to Argent D'Nur and sought to ally with its people. The Argenta were astounded by the Maykrs' magnificent technology and their promises that the faithful would be brought to their heavenly dimension of Urdak, and were soon convinced that the Maykrs were gods. Although the Wraiths were still venerated, they were placed into a deep slumber in the Elemental Sepulchre to prevent their power from becoming uncontrollable.

After a time, the Khan Maykr spoke to the king of a warrior who would cause a schism among the Argenta, claiming that only a holy rite with one of the Maykrs' own machines would be able to expose him. This "Divinity Machine" would cleanse his impurity and ensure the prosperity of the Argenta.

During the reign of King Novik, a strange outlander was found badly injured and near death, ranting about "impending doom and the forces of darkness" in a foreign tongue and covered in blood that was not wholly his own. Following the Argenta traditions, he was taken to their Coliseum to be offered the chance to fight for his freedom in a trial by combat. In spite of his wounds, the stranger fought with surprising ferocity, sheer stubbornness keeping him from succumbing to his injuries. Though victorious, his only reward would be a chance to die honorably fighting the enemies of the Argenta. The Khan Maykr, on the other hand, was more intrigued by the dark realms the stranger spoke of, seeing it as another land for the Maykrs to enlighten.

Not long afterwards, the first reports of demonic invasion arrived, with the Eastern mountains of the Alorum being first to fall. The Argenta and Maykrs alike were baffled by this mysterious new enemy.

It was the Order of the Deag that discovered the secrets of the Hell essence that the demons used as an energy source. The Argenta were soon able to utilize this force for themselves, allowing them and their Maykr allies to devise new weapons and drive back the invaders. Though some of the Night Sentinels voiced suspicion over the nature of the essence, the people soon grew dependent on its use.

Meanwhile, the outlander's prowess had earned him the unprecedented merit of being made a Night Sentinel himself; his reputation, as well as his hatred of the demons, made him both a powerful weapon and a valuable ally. To defeat a mighty Titan called "the Dreadnought", the outlander was taken to the Temple of Purity by Samur Maykr, the chancellor to the Khan Maykr also known as the Seraphim. Acting without the consent of the Khan Maykr, Samur subjected him to the Divinity Machine, granting the outlander incredible power. Taking a Crucible as his weapon, he killed the Titan and became known as the "Doom Slayer". Strangely, the Khan Maykr did not seem upset by her servant's disobedience, though he vanished soon afterwards. It was assumed that the Seraphim had been exiled.

Unknown to the Argenta, the Khan Maykr had begun construction of secret factories in Hell, sending her servants to negotiate with the demons to allow them safe passage. All this would be exposed during a mission where it was discovered that the Essence the Argenta used was derived from the souls of their dead. To their horror, the Night Sentinels saw that the monstrous factories where the dead were rendered into raw material were built with their own technology as well as that of the Maykrs', refining the Essence into Argent energy. In return for a share of the Argent energy produced to sustain their homeworld of Urdak, the Khan Maykr had agreed to grant the demons access to all the worlds under the Maykrs' influence - an unholy alliance between Heaven and Hell.

The Night Sentinels, loyal to King Novik, tried to warn their people of what they had seen, but were disbelieved and declared heretics. Argenta society soon became divided between the Ascended Empire devoted to the Maykrs and the Night Sentinels who remained loyal to their rightful king.

As the civil war continued, the Order of the Deag claimed they had found a chance to end the conflict. The Doom Slayer and the most valiant Night Sentinels would attack the infernal factories of Nekravol, cutting off the Argent energy supply from the demons and the Maykrs alike. When they entered the portals, they found the Deag had sealed the way back and realized they had been betrayed once more.

Deag Grav, described by the demons as a "lowly Hell priest", was finally able to corrupt the Night Sentinel Commander Valen, who would come to be known as "the Betrayer". Valen had been tortured with horrific visions of his deceased son's suffering in Hell, and Deag Grav promised that he would be resurrected. In return, the Betrayer would lead the Hell priest and his forces to the Wraiths. Deag Grav used the power of the Crucible to destroy the Wraiths and forged a powerful source of Argent energy, known as the Well, from their souls. This began a new period in Hell known as the Ascension, and immediately led to the fall of Argent D'Nur in a massive attack. King Novik and the remaining loyal elite of the Night Sentinels ultimately perished in a last stand against the demons. The only ones who survive among the Argenta now are those who continue to serve the Maykrs, and by extension the forces of Hell.

As repayment for his service, the Betrayer's son was indeed resurrected, but in the form of the Icon of Sin, who was then unleashed on Argent D'Nur to drag it into Hell. 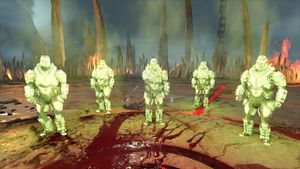 It is unclear how many of the loyal Night Sentinels survived the fall of their civilization, but several are shown fighting alongside the Doom Slayer in a page from the Book of Daeva apparently after or during its fall. Accordingly, upon freeing the Crucible from the control of the demons, the Doom Slayer also releases five of the Sentinels' souls from captivity. Before the Slayer is tethered away by Samuel Hayden, the apparent leader of these spirits salutes the Slayer. Four of these spirits later reappear during the Slayer's sojourn through the remains of Argent D'Nur and assist him by leading him through the ruins to the resting places of the Wraiths, and finally to the location of Olivia Pierce.

The Night Sentinels who took the side of the Khan Maykr in the civil war would later be resurrected by a combination of Hell magic and Maykr technology, transforming them into the demons called the Marauders.

The Betrayer is known to have survived, remaining in Hell to fight the demons in the hope of atoning for his crime.

In the penultimate level of The Ancient Gods, Part Two, The World Spear, the remaining Sentinels are rallied by the Slayer when he lights the Torch of Kings. Under the command of the redeemed Betrayer, Valen, they join the siege of Immora. Their forces include at least one Atlan, numerous energy mortars and tanks, fire support aircraft and large hover ships. The ground troops are armed with Wraith energy weapons and lightning guns, which return from the previous game.

The following locations are present in the 2016 multiplayer, and so are of ambiguous canonicity: