Nightlife is a single-level PWAD for Doom II using the GZDoom source port. It was created by Joshua O'Sullivan (Dragonfly), uses the music track "Different Heaven" by Nekozilla, and was his submission to the Vine Mapping Contest 2016. 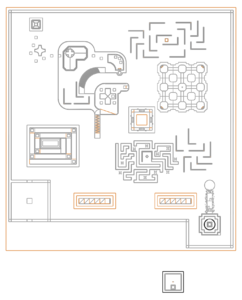 Map of Nightlife
Letters in italics refer to marked spots on the map. Sector, thing, and linedef numbers in boldface are secrets which count toward the end-of-level tally.

The basic idea for the map was to have the visuals matching the soundtrack (provided that one plays without reloading saves, going to the menus, or otherwise pausing the game). The synchronization between the skybox and the music is based purely on the number of tics since the start of the game, and was broken when GZDoom moved to a more precise timer with version 3.2.2, causing the game to be about 2% slower by having exactly 35 tics per second instead of about 35.7 tics per second as in the version it was developed for (2.4.0).