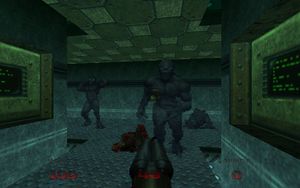 The first nightmare imp encounter, found at the beginning of MAP03: Main Engineering.

The nightmare imp is a translucent blue and purple imp which is the first new monster encountered in Doom 64. It moves twice as fast as the standard imp, and it hurls purple fireballs which also move twice as fast as those of the standard imp. These properties make it similar to the ordinary imps in Doom's Nightmare! skill level, possibly serving as the source of the creature's name. It is described as follows:

"An Imp is bad enough, but picture a faster, more aggressive one. Now the bad news... he's harder to see, too."
― Doom 64 instruction manual [source]

A press release beta of the Sony PlayStation version of Doom included nightmare imps which, like the nightmare spectre in the same game, were subtractively blended against the background and had double the health of normal imps. A screenshot of the monster appears in a pre-release review in UK game magazine Maximum with the following description:

"Nightmare Imps
Warping in from another dimension for your blood!!!
The imps from previous Doom incarnations are back with a vengeance, but hiding in a few areas of PlayStation Doom are the more fearsome Nightmare Imps. These beings are essentially the same as their weaker brethren, but have been partially warped into the ether on their journey from Hell. Expect slight difficulties with these rarely appearing creatures, but don't let them catch you off guard; they don't die as easily and are just as deadly accurate with their fireballs."
―Maximum Issue 2 [1]

All such nightmare imps were removed from the game before its final release for reasons unknown. The technical capacity for this enemy to exist is still part of the game engine, as any thing which can be placed on a map can be given the "nightmare" flag, and will become subtractively blended and double its spawn health.

The nightmare imp is first encountered on these maps per skill level:

The main game and the extra episode contain the following numbers of nightmare imps per skill level: