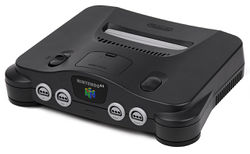 The Nintendo 64, stylized as NINTENDO64 and often referred to in short as "N64", is Nintendo's third home video game console for the international market. Named for its 64-bit central processing unit, it was released in June 1996 in Japan, September 1996 in North America, March 1997 in Europe and Australia, September 1997 in France and December 1997 in Brazil. The console remained available until the system was retired in late 2003. IGN named it the 9th greatest video game console of all time;[1] and in 1996, Time Magazine named it Machine of the Year.

The Nintendo 64 game console is notable in the context of Doom and Hexen for hosting two Doom engine games, both running versions of the engine heavily customized for the platform's hardware rendering capabilities, controller layout, and computational limitations:

A third game, tentatively titled Doom Absolution, was briefly planned by Midway but was cancelled only a few months after its announcement.