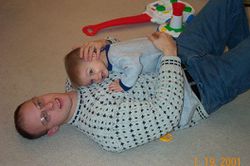 Chris "NoSkill" Crosby was a father, a husband, and a Doomer. He was likely the first Doom player to be referred to as "Doomgod", and played around 1994-1996. However, at the age of 23 he was tragically killed in a car accident.


NoSkill was the first person to obtain a very high skill level in First-person shooter multiplayer. The major evolution of competitive FPS gameplay could be said to have begun with the skills that he first displayed.

Few have surpassed him.