NODES is the name of a WAD lump which is a component of a level. It is normally generated automatically from other data for the level using a node builder tool.

The nodes lump constitutes a binary space partition of the level. It is a binary tree that sorts all the subsectors into the correct order for drawing. Each node entry has a partition line associated with it that divides the area that the node represents into a left child area and a right child area. Each child may be either another node entry (a subnode), or a subsector on the map. 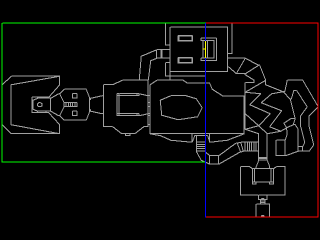 This diagram shows the root node division of the level E1M1: Hangar. (The root node is the highest-numbered entry in the lump.) The partition line is shown in yellow, with a small hash mark drawn at the midpoint of its right side. The partition line is extended in both directions using a blue line. The right bounding box is drawn in green, and the left bounding box is drawn in red.

As expected, the partition line divides the map roughly in half. All points on the map are either to the right or left of the root node partition line. The right bounding box appears on the west side of the diagram because the partition line runs downward (from north to south), as noted by the hash mark on its west side. 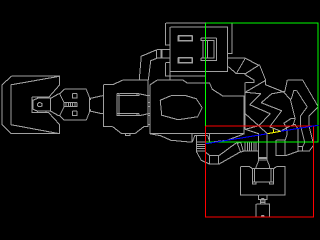 The second diagram shows how the first left subnode is further subdivided. The bounding boxes overlap, but it is the partition line that is used to determine which subnode of this node any particular point belongs to.